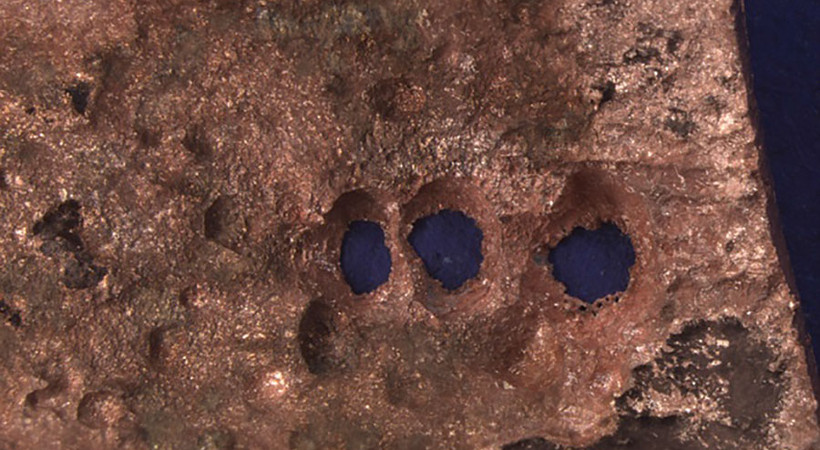 Corrosive Agents in Your Condensate

Home » Corrosive Agents in Your Condensate

Situation: Fourteen-year old steam coils with no previous leaks suddenly develop multiple leaks over the following two or three years – in some cases so many that they can no longer be repaired. The owner thinks the coils have worn out and that new replacement coils will last approximately as long as the original coils. To everyone’s surprise, the replacement coils begin to have the same type of failures within a few months to 18 months. This causes the owner to question the quality of the replacement coils, and the chain of events may also include a tarnished business relationship between the owner and the installer. What happened??

This is a situation that is played out thousands of times per year in steam systems across the country. Basically, none of the parties understood the real cause of the problem. Simply put, here is “what happened”.

The original steam producing system changed over the years. The system that was once void of contaminants that would corrode copper or steel are now present in high enough levels that corrosion can occur quickly. In this example, none of the three parties (owner, installer, and manufacturer) understood the system dynamics that created this common occurrence.

Most steam systems have proper treatment tests, but over time, the three corrosive agents (oxygen, carbon dioxide, and ammonia) can increase to a point where the corrosion begins and then accelerates rapidly. In the example above, the fourteen-year old steam coils performed without incident and then needed to be replaced two years later. The problem with treatment tests is they don’t look for these three corrosive agents. The first two corrosive agents, carbon dioxide and oxygen, enter the system from air leakage into the condenser or from decomposition of feed-water alkalinity. De-aerating heaters remove most of the alkalinity in a system, but most of it is converted into CO2 in the boiler and released into the steam.

Ammonia is the third corrosive agent that can be present in low concentrations. Contamination is usually caused by a breakdown of nitrogenous organic contaminants or is fed into the system to control condensate PH. Obviously, the feed rates must be properly monitored and tested to be sure these levels don’t rise too high.

There are also other corrosive agents that may form, even though the PH is properly maintained. During the dissolving of iron and copper oxides; levels of chloride, sulfide, and acetate can dissolve part or all of the oxide layer which is the security blanket for the wall of the tubes.

It’s very important that your steam system periodically be tested – at least for the levels of the three main corrosive agents – oxygen, carbon dioxide, and ammonia. This should definitely be done immediately after analyzing the first pin hole detected in a coil. The ratty pin holes are almost always located on the bottom half of the tubes, and it’s a direct indication that one or more corrosive agents have increased to a point where failures are beginning to happen.

If you have detected a pin hole(s) is present, then you have two alternatives.

Many engineers and product designers recommend increasing the thickness of construction materials and think this will provide longevity. This is not the case! The reason is that the corrosive resistance of the material, and not the thickness of the material, creates longevity. Thickness relates to pressure and has little to do with corrosion resistance.

Systems change, and over time, corrosive agents can create failures. This can happen even when a company is very diligent with the care and maintenance of their steam system. As stated, it happens thousands of times per year. Don’t create a new problem by replacing the coils without knowing the true cause of the failures.